Welcome to Oslo, Norway. Here is Oslo Chauffeur Service’s guide to arriving and departing from the airports along with some key business travel facts to help during your stay.

Set at the tip of Oslofjord leading to the North and Baltic Seas, Oslo has always had close business connections with the sea. There are 60 ships a day that use the city’s port, handling 125,000 containers annually. The city is also home to the world’s largest ship and offshore classification society DNV GL.

Yet the sea is not Norway’s only economic powerhouse. In a country where 99% of the electricity is generated from hydropower, it is no surprise that the country is a world leader. Statkraft is the largest renewable energy producer in Europe and is based in Oslo’s Lilleaker suburb.

Oslo’s central business district comprises Vika, Aker Brygge and Tjuvholmen. Vika is the city’s diplomatic district while Aker Brygge, which was previously home to a vast shipyard, was redeveloped in the 1980s and now combines business, shopping and entertainment in a mixture of traditional wharves and more modern buildings. Fornebu is an R&D hub that attracts many ICT companies including Telenor as well as being the office headquarters of Statoil; airlines SAS and Norwegian Air Shuttle are also here.

Oslo Chauffeur offers trips to and from all Norway’s airports, including the three major airports in the capital of Oslo: 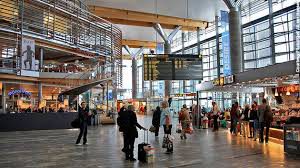